There have been two documented events called the Baron’s Revolt (or also known as Baron’s War) in medieval English history. The first was from 1215-1217 (also portrayed in the movie Robin Hood featuring Russell Crowe) and another one from 1264-1267. The important consequences of these events are the gradual changes from absolute monarchy system which has been in used for some times to the constitutional monarchy system which have since then been in use in many countries including our own.  The events also introduced a sets of documents known as the Magna Carta which has been the foundation of the freedom of the individual against any arbitrary authority as the important symbol of liberty.

In our modern country’s history, the constitution amendment in 1993 involves the limitation of the royals’ legal immunity. It was sees as a victory for the commoners after few incidents involving a few royal family and common people which were made into the news and could turn the people against the royals. It was not seen by the majority of the people at that time as just a fight between royalty and nobility (read ruling government) but the support from the nobles for the large segment of the people who are seem to be against the royals.

There were few other spats between the royals and the nobles from then on but the event that happened a few days ago that seems to change its tune where the commoners are the one who seems to be supporting the royals this time instead of the nobles.

There have been many questions which no answers were given even when the questions came from one of the most respected commoner in this country, the one who have ‘been there, done that’ once and have never been as far as I remember, shy away from answering any questions without having to resort to some written script during his time as the Prime Minister.

Obviously, rather that turn up to the event that is supposed to be a platform to answer, if not all then at least some of the questions, as expected he did not turn up. Citing security matter (which I find it strange as the place itself is what can be said as the party’s own headquarters) and as we know he then left the country even when disaster struck East Malaysia.

Stranger more is that the Prime Minister then left to his nobles then to answer to the questions and one among them even dares to question the questioner. Later we hear the words that ‘royalties should be above politics’ and so on but my take is that while it is true, it has been used by this noble for a wrong reason and certainly out of place.

Yes, the royalty should be above politics by not showing preference of which parties especially during election time so not as to influence the commoner whom they will choose to be their modern day nobles. However, this new event is not about politics at all. This event is about questions from the commoners regardless of their political support, including from the ruling government’s party themselves has been asking. It got nothing to do with politics. It all got to do with how the government governs the country which will affect the commoners the most, rather the royals and the nobles. Since even the most respected commoner’s questions has even been brushed aside, then what can you expect when the questions comes from the more common commoners?

This could be trigger to what the nobles have not been imagining of, where the commoners sided with the royals against them. Could this also trigger our own Magna Carta to be written where we can have a truly transparent government in all possible things especially that involves the money which come from the taxes we’ve paid as long as they do not involve national security. We want to know what the money is going to use for before it’s being used and rather not know them only after they were gone.

Disclaimer : All images are for illustration purposes only and this blog author does not claim any copyright to the published images and he only copied the images already publicly available on the internet (unless stated). The blog author also wishes to state that his opinion posted on this blog are his alone and not paid by any political parties.

For Malay language version please visit this link . There have been two documented events called the Baron’s Revolt (or also known as Bar... 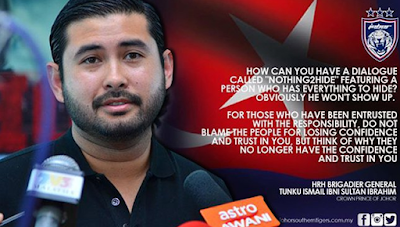 Adam
I assume I need no introduction. So you want me to tell you the story of my life ? Shall we begin like "David Copperfield"? "I am born... " "...I grew up." Or shall we begin when I was born to darkness, as I call. That's where we should start, don't you think? Don't be afraid. I'm going to give you the choice I never had. (If you don't know where the above came from then you should read more)